The small village of Jubbet adh Dhib lies vulnerably in Area C in the midst of three Israeli
settlements in the hills outside of Bethlehem. The idea of opening a beauty salon came from
discussions between the Protection Group and volunteers. The need was identified for opening such a
salon for the women in the village. The women were only able to get their hair, makeup,
and nails done whenever there was a major event (such as a wedding) or other occasion happening in the
village. Previously, the nearest beauty salon was six kilometers away from the village so Jubbet
adh Dhib women had to travel and spend money on transportation in order to reach those services.
Therefore, the community recognized that there is always strong demand for such services to be provided
in the village. This will allow female members of the village easier, more convenient, and cheaper
access to those services as well as saving on transportation costs.
The beauty salon was recently opened, in October 2016. It began with a 9900 ILS grant from
EJ-YMCA-WTP and within the first eight weeks, the two women beneficiaries, Doua and Samah,
have already provided services for approximately 2000ILS. The beauty salon has been receiving
customers from Jubbet adh Dhib as well as from the nearby villages such as Za‘tara and Beit
Ta’mir.
Doua (20) has just begun studying English at the nearby university where she is
obligated daily to submit to a search and show her papers at a checkpoint on her way. Her
household consists of eight individuals. Doua is using the income she generates from the salon to
assist her family financially and to pay for her university’s tuition fees.
Samah (19) is an aspiring, certified beautician. She is currently in 11th grade. She
has been given the opportunity to attend styling workshops and has acquired a cosmetology
certification. Her household consists of ten individuals. Samah is also using the income she
generates from the salon to assist her family financially and to save up for other beauty and
cosmetology courses. She proudly explained, ”When we have weddings or parties, all the women in
the village want to come here to get their hair or makeup or nails done. They have even come from
other villages.” 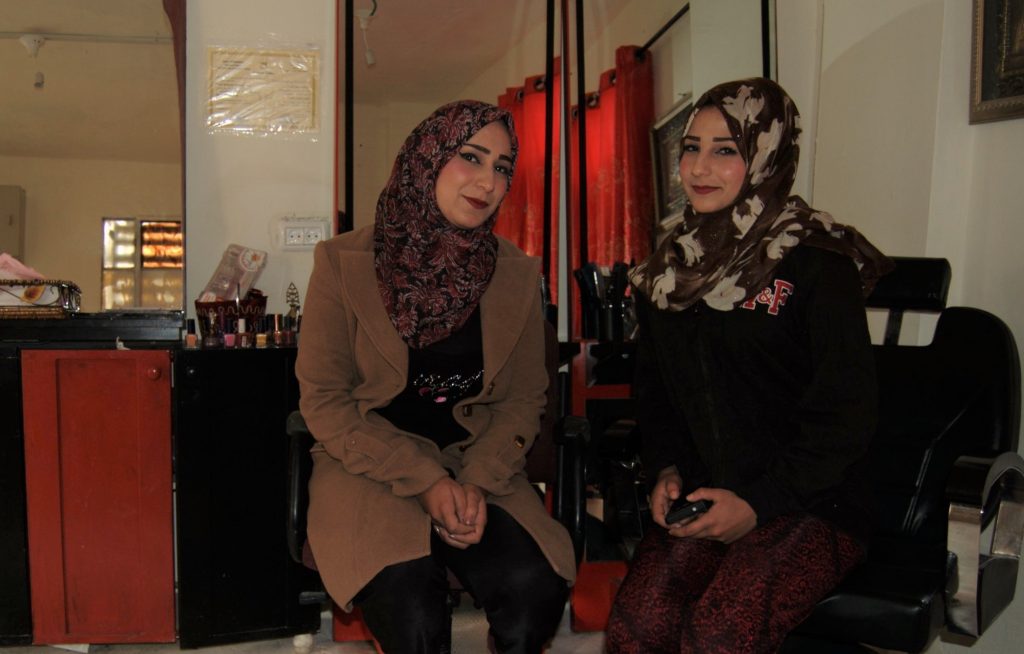 Doua (left) and Samah (right) at the beauty salon
Both Ilham and Yusra were volunteers with the village’s Protection Group who participated
in identifying not having a beauty salon as a market niche. Both young women have been very
active and feeling much more confident and powerful after running a project on their own. They
also feel proud of being able to work at an exciting place, benefit the women of their village, and
help their families at a young age. When the two young women were asked what impact these
community interventions have had on them, Samah voiced her happiness at the opening of the salon
and her hopes for the continued expansion of the project and further training. ”It helps our
ambition.” Doua said that ”This resilience project teaches us to be dependent on ourselves.” With
their hope for expansion, they also aspire to be able to hire other women to work with them at the
salon in the future.
Bright, hardworking women such as these two, Ilham, and Yusra are the future of Palestine.
Protection Groups and members of both villages are very proud of their accomplishments: the start
of creating income generating activities for women. These outreach micro-projects under the
Resilent Project help rural Palestinians reach their ambitions and improve their communities’
livelihoods. Thanks to the efforts of EJ-YMCA, these communities are continually being
strengthened by ultimately being taught how to be creative and inclusive in responding to
vulnerabilities and and anticipated risks, how to be organized, and how to manage their own projects by
themselves. 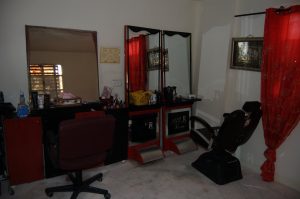