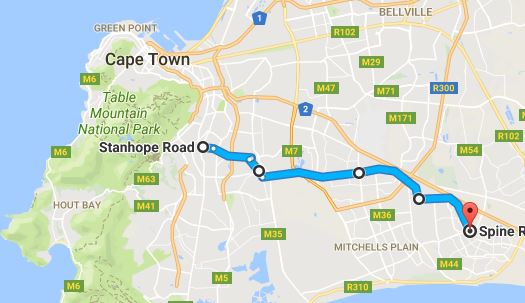 A township tour starting at the beginning of one road and ending in the in the end of the road! As the title say, a road can be so much more than the cement, asphalt or gravel making it up. It’s a connection between different places, a place for entrepreneurship and a reflection of the society when it was built. It’s not something that is just there or just appeared. The building of a road is often well planned and the location is decided to solve a problem or achieve a certain purpose. Lansdowne road is a still existing mark of the structures in the society that were built up during apartheid. The road starts in Clermont in the fine areas of Cape Town and ends in Khaylisha, the second biggest township in South Africa.

This will be a blog post with a lot of pictures of different areas along this road. A reflection on different effects of the road, both positive and negative, will be commented on and the question is does it have to be like this?

My supervisor commented on this and asked us if it is poverty if you can afford DS-TV with a high monthly cost. I have been thinking a lot about this question. The first thing to consider is that a parabola on the roof is not a proof that you actually pay for the television and I was told by one of my colleagues that it in some cases is more of a status symbol to have it there. But, even if they pay for the TV, how much does it cost compare to the cost of a higher living standard? Could it be a way of escaping the environment you live in for a while? I am maybe not answering the question and I haven’t been in any of the shacks, but I’m not sure if a parabola on the roof should be the sign that you’re not poor.

Our trip down Lansdowne road continued further and past Nyanga, an area with a mix of smaller houses and metal shacks. The public areas as churches and schools were now starting to all be protected behind metal fences and barbed wire instead of the nice walls seen in the beginning of the road. The DS-TV parabolas now also started to appear on the poles for the electricity line and not only on the shacks, probably because of lack of space.

Even further down the road, we got in to the second biggest township in South Africa: Khaylitsha. This was when the construction of the shacks were getting more special and the creativity was really showed. It was at the same time fascinating and horrible to see how people end up to build their living. In this area, everything from shacks falling apart to completely newly build one and two level shacks can be seen. We even saw one that was built on top of a bus stop. In this area though, we also experienced a lot of activity as a lot of kids playing on and around the streets, something not seen in the beginning of this trip. This could be a reflection of that there is less space inside to stay at. We went out of the car to get some meat and we got to experience the vibe around the BBQ area which were really good. Music on and dance and a lot of barbecues. At the place of the BBQ we sadly also had to experience when a drunk angry man grabbed one of my Swedish colleges by the arm and acted aggressively. Though this was also a time when we got to experience how helpful everyone were stepping in to support

When the road ended we had traveled a distance that, according to google maps, should take about an hour, but also a distance to show all the diversity in the city of Cape Town. A structure that a road was made to be able to let the unwanted live away from the city but still be able to get in to town if they got a job. Of course there are people earning on the current structure. As an example, the people at the finer area and the people running business along this road where people have to travel. But in whole I don’t think that the majority is winning anything on having a separated community. A “we and them” structure might be necessary sometimes to survive, but in the end it contributes to a world when you see some persons as more valuable than other. This structure will then lead to a society with more crime and inequality due to uneven opportunities and a feeling that it is “ok” to do something to the other group of people.

I want do end of with some questions:

I finally just want to address a big thank you to my supervisor Sindiswa Mbude and my volunteering colleague at the YMCA Cape Town Luyanda Xipu for taking me on a tour down this road outside of working time at a Sunday, it is very much appreciated!

I end of with some pictures from the tour: 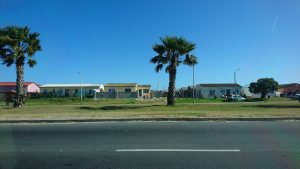 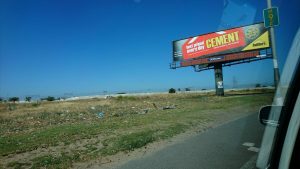 The fine areas at the start of the road.           Behind that wall the township is starting 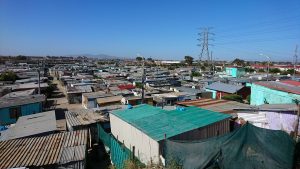 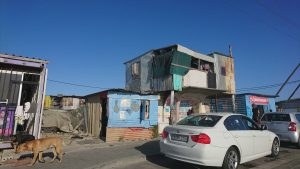 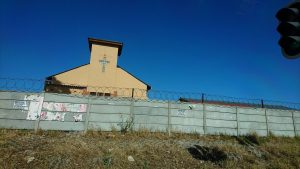 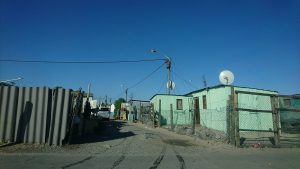 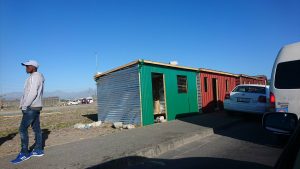 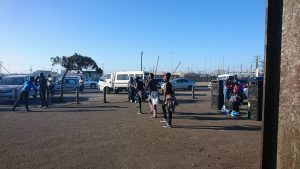 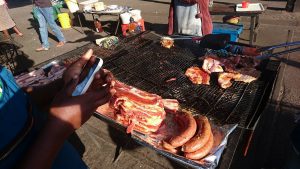